Checking My Ego: Lessons in No

Checking My Ego: Lessons in No.

Today I had to check my ego. I went to visit my horse, Ben, and I had every intention of riding. It had been a week or more since I had seen him. My schedule is intense, and my efforts to continue to build my online business to make more time are going slow at the moment. This leaves me limited extra bandwidth, which unfortunately Ben often pays the price for. This is on me. Ben fortunately lives in a large pasture with four other geldings, and has a good time in his offer hours...days....sometimes weeks. But today I had made space to go ride my horse. My intent was to practice some of his skills under saddle, to use the time to relax and focus on our goals with his collection, and responsiveness. I have finally been able to transition him to bitless (Ben was initially trained in a very classical manner, and I have been working towards a more modern, less forceful way to interact with him.) 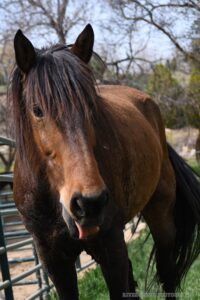 He was not aggressive about it, or explosive which has been his method in the past to communicate when he was overwhelmed, or frustrated. But he wasn't feeling it. As I went through the routine of practicing mounting up (a historically problematic area for him) Ben said no. He refused to stand to be mounted, his tail swished consistently and his agitation was obvious in his body language. Ben has always been particular about who gets to ride him, and today he told me that he did not want to be ridden.

There might be a dozen reasons for this. I don't work with him enough to keep his eagerness to explore and learn sharp. It was early morning, and I had called him away from his breakfast (which he came willingly, but still.) The list goes on. But the point was; he wasn't interested.

In classic horsemanship guidelines I would have been required to force the issue. You would have heard some old cowboy telling you “Don't let him get away with that!” And a variety of other euphemisms that boil down to: make the horse do it. But I have worked very hard to teach Ben to present his feelings in a less explosive, and dangerous ways. I have worked hard to unlearn my own very classical horsemanship education (that started when I was just old enough to spell my own name.) And in this paradigm of putting the horse first, Ben made it clear he did not want to do what I wanted to do, and I took him at his word.

I stress a lot on the value of letting our dogs say “no.” I teach that a no is valuable. I teach that it is meaningless to have our dogs say “yes” if we do not also allow them to say “no.” This is not something that many horse people practice, it is something I am making strides in practicing. Today, I practiced it.

As I went through the work I noticed Ben's agitation, I also noticed my own frustration that he was not willing to cooperate and follow the cues I had given him. As my frustration increased, so did his. And at some point I realized what was happening: Ben was saying he did not want to be ridden today.

I completed a successful approximation towards our goal, I stood on the mounting block (For those who don't know I am very short, and Ben is absolutely huge) put my foot in the stirrup, marked it and get back down onto the ground and rewarded Ben for holding still during that. Then instead of taking advantage of the fact he was cooperating that far, and jumping up on him, I respected his feelings, and rewarded his good hard try by walking away. He followed me to the barn where I untacked him , gave him a nice brushing and returned him to his pasture, and his waiting breakfast. He shoved his head in his feed trough and didn't watch me leave as he normally does.

Could I have continued and just made him deal with it? I had no intentions of working him hard today, it was going to be more a mental work out then a physical one. It was mostly to just spend some time with him, practicing basics (as with dogs the basics are your foundation of everything else.) All in all it wasn't going to be a stressful day. And I could have made him hold still for me to mount him and proven my point that it is useless to say “no.” But what would that have taught him? What lesson was he likely to take home from that? Was it that being ridden won't be bad? Maybe. Or would it be that subtle, peaceful objections will be ignored in the face of his owner's desires? Also maybe. And if it is the latter, what do you suppose he will do the next time he is uncomfortable or unwilling to try something I am asking of him? Do you think he will remain polite, and peaceful? Or will he, in an attempt to be certain he is heard, escalate his responses? Perhaps to a level where he endangers one or the both of us?

I know Ben well. Perhaps in many ways better then I know myself. I know that when he is frustrated, angry, upset or scared he will explode. That explosion can be very dangerous for small humans, and for Ben himself. I have worked hard over the last two years to help Ben learn to trust me, to believe me when I say everything will be okay. In order to not undo that trust, I have to believe him when he says he doesn't want to do something. I have to frame uncomfortable, or scary things in a way that allows him to trust me completely when I ask him to do them. I have to respect his no, so I can trust him when he says yes. Ben is my ride or die, but that is meaningless if he doesn't have a choice in the matter. Today he made his feelings clear, so I put him back in the pasture where he promptly resumed his breakfast with out looking back.

As I reminded my ego to check its self, and set aside my daydreams of riding my horse today, I realized that practicing what I preach matters. And it matters the most when it's hard for me to do. As I drove away from the barn Ben's head was still in his trough eating breakfast. He was hungry. I am not keen on working out when I'm hungry either.

"The more chances we give them to say no, they more chances they have to say yes." - Pine Irwin CPDT-KA, ABKA L2, PPG, FFCT, IAABCM, SFCS , QTDE