By admin Uncategorized No Comments 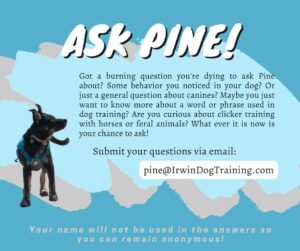 "Dear Pine,
I have a new dog I adopted from the local shelter that I've had for about a week. His biggest behavioral issue is that he LOVES other dogs. He sniffs my other dogs and wants to get in their space, which my smaller/older guys don't appreciate. I've so far successfully worked on making sure he treats the other dogs (who are about 10lbs to his 20lbs) calmly and respectfully.
He's extremely good on a leash and uninterested in the cats we see and greets humans politely. However, I've noticed the one thing he does react to is other dogs. He wants so badly to meet and play with other dogs he sees on leashes.
My question is: will taking him to a dog park help or hurt? I want to allow him to meet and play with other dogs, especially bigger guys that might be more his speed, but I don't want him to end up hyper when he comes up and lose the progress I've made with him with his dog brothers. Does he need more training and time before I take him to a dog park?
Thanks,
LEAVE IT, JACKSON"
Dear Leave it Jackson! 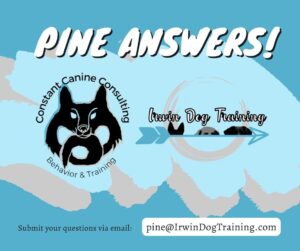 Dog parks for dogs who like them, can be a great chance to work out some energy and socialize. But there should be some boundaries, and rules, about how we engage in them!
Jackson likes the dog park (presumably), and he likes other dogs. Providing a good outlet for that is going to be helpful for his over all fun etc. The benefits of using an outside location like the dog park is that it isn’t the home environment, and he can learn that at home we don’t do X behaviors. My guys for example understand through the use of reinforcement in the calm, chill behaviors, that the house is not for wrestling (this is due mostly to the fact my TV is unlikely to survive an 85 pound Labrador doing her best WWE impersonation.) But out side and in the hills you can be as rowdy as your companions will tolerate (I will intervene and redirect dogs who are struggling to maintain their composure. Naiche is like that she gets overstimulated and becomes a menace and needs some help calming down.)
So for dogs who like the dog park (and they are actually the rarity, most dogs don’t find a free for all rough play with strange dogs all that great) there can be a lot of benefit to giving them an outlet for those kinds of things. Within reason. People have a tendency to roll up to the dog park, sit on a bench and let their dog run wild like a hooligan for an hour or more. That is a LOT of adrenaline and cortisol in their system, flooding their nervous system and brain with stimuli. This can take up to 3 days to work it’s way out of their system, so their nervous system is basically a pump primed and READY. TO. GO. For days after something like that. It can lead to some undesirable behaviors in other areas – such as dogs who are very difficult to get to chill at home etc.
I have rules for dog park dogs. They are that we should only spend about 15 to 20 minutes playing before we leave the main area of the park and go for a leashed walk to work on some calming behaviors elsewhere. Depending on the dog park, if it’s located inside of a larger park, I will go to the opposite side of the park and work on settling behaviors in a quiet corner. If my dog can spend the next 5 to 10 minutes chilling, staying focused/engaged with me and their breathing can relax and be more normal (they can still be panting, but not that heavy panting that comes with over excitement and exertion) at that point we can return to the park for another 15 minutes play max. At that point it’s time to return to the quiet corner and let the dog chill. If they can chill then we can go back for another 10 minutes. At that point it’s time to go home. Because they have spent nearly an hour engaged in rowdy dog on dog play and that is plenty of time to get all the benefits from those things they desire, but not over do it and create an adrenaline junkie. (You see adrenaline junkie dogs at parks, or often with the game of fetch where they will literally play until they are about to drop from sheer exhaustion… This is not mentally healthy and can pose risk to their bodies as well.)
For dogs who tend to get to the park and are SO EXCITED I will choose to let them out of the car, on leash. And ask for some settling/mat behaviors for a few moments before we head for the dog park gate. This is because I don’t enjoy being drug to the gate. And because I want to ensure we have some frame work of “yes I know you’re excited, but I need you to remember to engage with me a little first.”
At the dog park all check in behaviors that are offered are rewarded. Jackson swings by to say hi: reinforcement is offered. You call Jackson too you? Reinforcement is provided, and bonus you can let him go again. One thing that many people make the mistake of is only recalling and asking their dog to re-engage with them when it’s time to go. Which creates dogs who do not want to recall or re-engage their guardian because “I don’t wanna go home.” Another good reason to do the play session breaks so you can ensure Jackson learns that coming to you isn’t the end of his fun, he just goes and chills out for a bit, gets a snack and then gets to play again.
Hope that helps!
Signed Your Neighborhood Ethologist,
Pine. (can I pull a Cher and just have one name? I doubt it.)
Do you have a question for Pine about dogs? Training dogs? How dogs think ? How dogs opperate? Or maybe something about learning ? What about feral dogs or even something to do with horses? ASK PINE! takes submissions via email and answers questions every couple of weeks!

Email to see your questions published (anonymously) and answered!